In a previous post a comparison was shown between two SSH library options for Python, with emphasis on their performance using native threads for scaling purposes.

For this post, their non-blocking performance using the gevent library will be compared as the two SSH library options available now in parallel-ssh.

Post has been updated with further scaling graphs for both clients.

Test script (see appendix) consists of identical parallel-ssh code for the two available parallel clients in the library, using paramiko and libssh2 via ssh2-python respectively as the underlying SSH libraries. The latest version of the library as of this time of writing was used - 1.2.0 - with latest underlying libraries as installed by its requirements and latest version of gevent - 1.2.2.

The script creates SSH sessions in parallel to a local to the client SSH server via loop back device, with concurrencystarting from one and increasing by one until completion.

A maximum concurrency of two hundred sessions is used for the comparison tests.

A single remote command, cat of a 26KB static file, is performed and standard output read one line at a time as parsed by the respective libraries.

Timings are shown for:

All durations are in milliseconds (ms) or multiples of. All tests performed on Linux, kernel version 4.4 on a six core CPU and OpenSSH 7.5r1 with OpenSSL 1.0.2l.

Here is how the two SSH clients compare on the above timings plus total time spent.

Shown below is time taken for all hosts in total.

Separate graphs for the two clients for up to two hundred concurrent sessions.

Results for the clients individually up to one hundred concurrent sessions, including CPU and memory usage graphs. 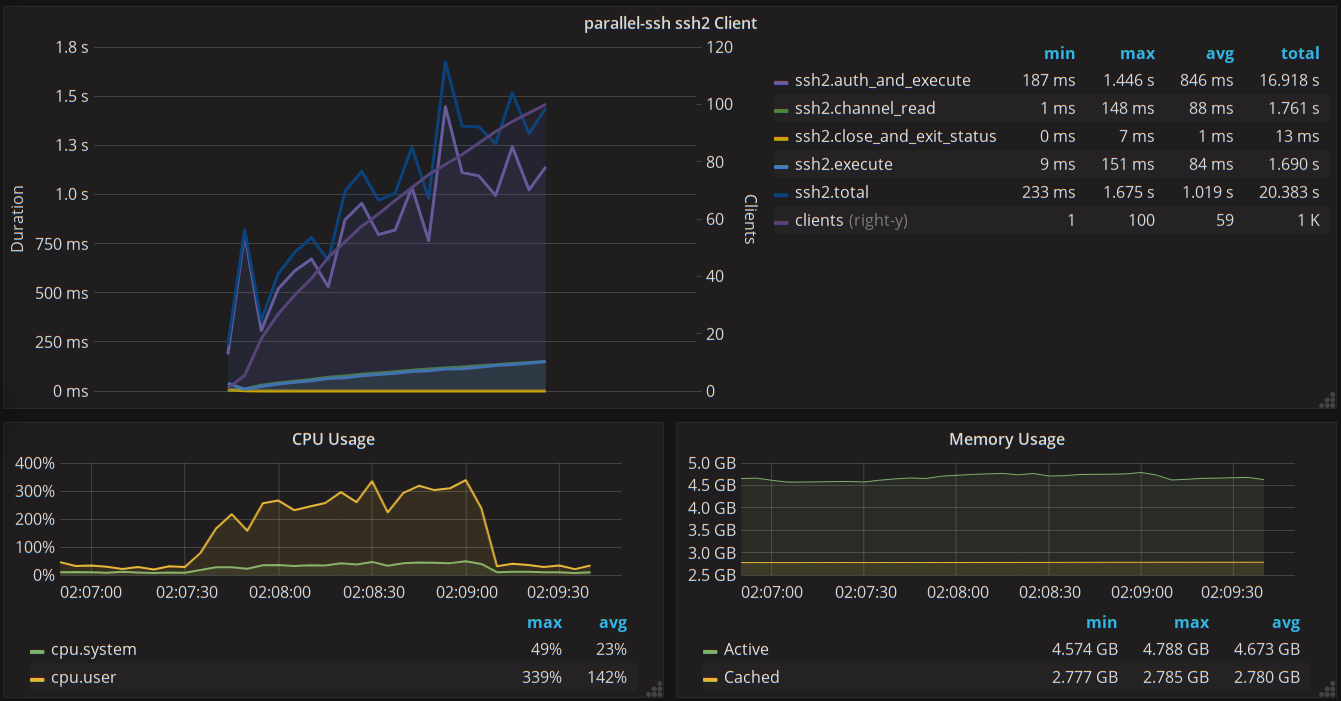 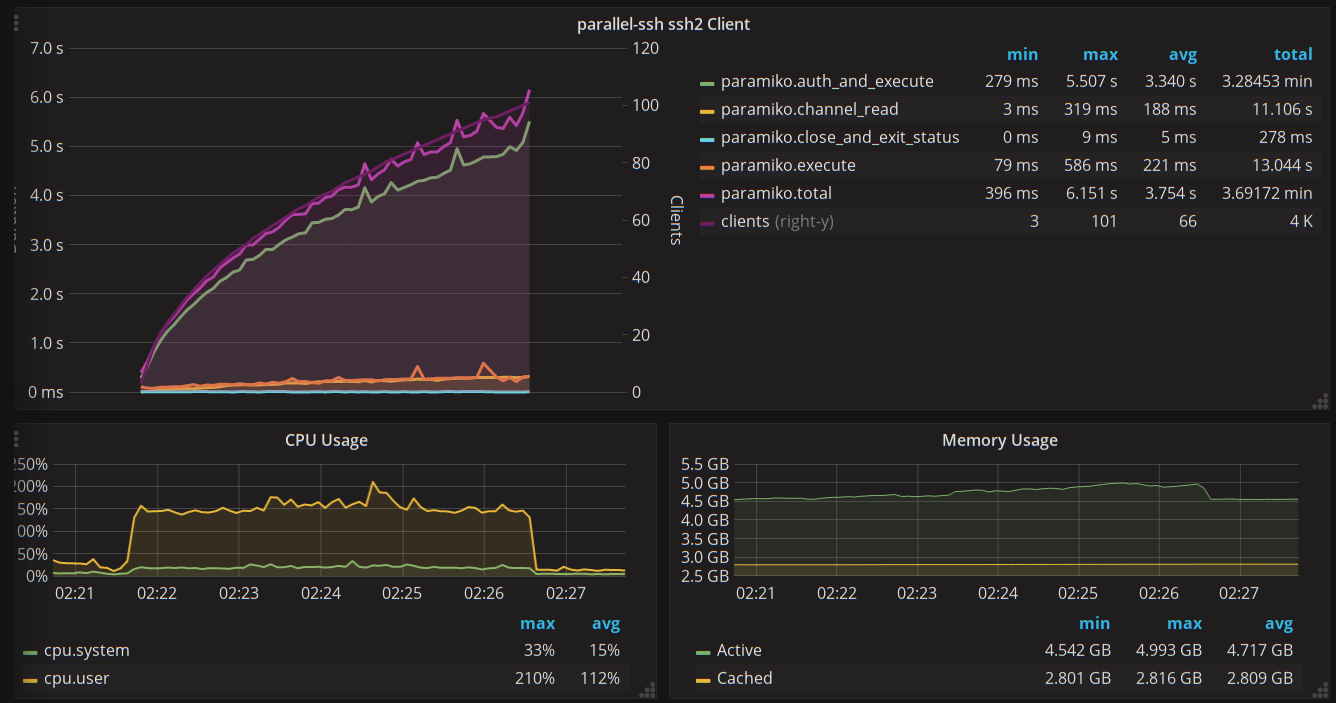 Further scaling of the ssh2 client is possible, though gevent and event loop overhead leads to diminishing returns, seen in the highest concurrency graph as intermittent spikes in latency that increase in frequency as concurrency ramps up. No limit was found as to how far concurrency could be increased.

Performance gap between the two clients continues increasing as concurrency ramps up with similar scaling for the respective clients as seen in previous graphs.

Relative performance of average times of the two libraries for the duration of the test at one hundred concurrent sessions.

At one hundred concurrent sessions, the ssh2 client is shown to be 2.86 times faster.

At two hundred concurrent sessions, the ssh2 client is shown to be 6.16 times faster.

On average for the duration of the test ranging from one to two hundred (1-200) concurrent sessions, the ssh2-python (libssh2) based client in parallel-ssh is shown to be a little more than four and a half times faster than the paramiko based client.

Latency for gevent based non-blocking clients compared to previous threading tests is, as expected, much lower for both clients while also allowing for much higher scaling.

Note that SFTP operations which were previously shown to benefit the most are not shown here as tests are against a single, local, SSH server and parallel-ssh SFTP operations are for copying files which would overwrite each other if copied to/from the same server.

It is also worth pointing out that this test puts a lot of strain on gevent and the event loop as the commands are short lived, causing contention on the event loop from all the coroutines wanting to execute. This can be seen in the graphs by the intermittent spikes in latency for both clients which increase in frequency as concurrency ramps up.

In all, tests show good scaling for the native library based client and the benefits of using native code extensions in Python libraries.

In future it would be interesting to examine further scaling of gevent and the event loop via native threads which is only possible with native code extensions that release Python’s GIL, putting parallel-ssh in a good position to take advantage of.

Test script and dashboard used can be found below:

Docker compose file can be used as-is to easily setup the dashboard, API and DB services as described below.

The test script writes data to a local InfluxDB via its Graphite service using a measurement.field* template.

Graphs were generated by Grafana, as queried from InfluxDB by InfluxGraph using the same template configuration as InfluxDB.

To replicate results, take care to use the exact versions of the libraries used here, including libssh2.